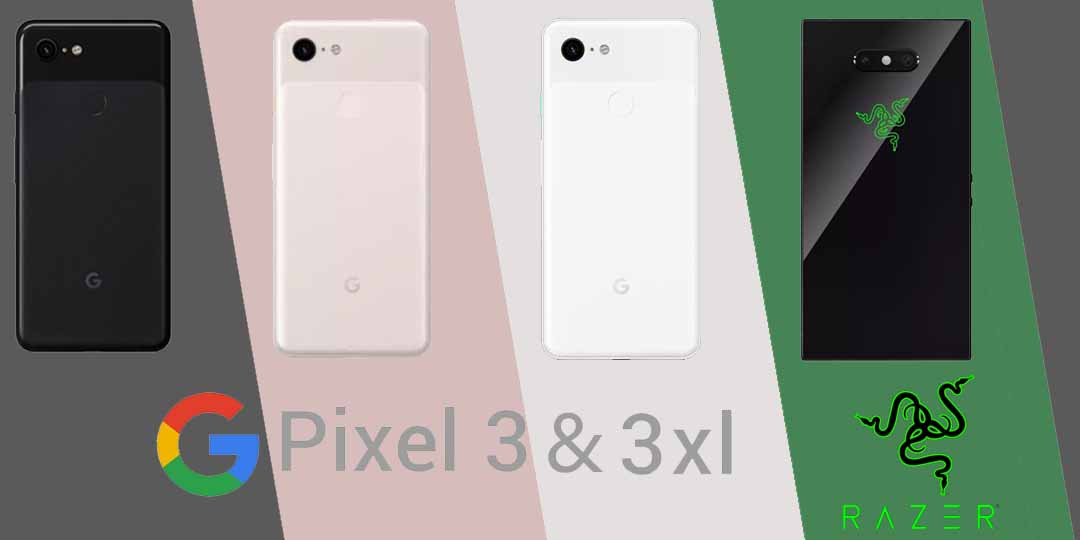 The past few weeks have been pretty busy so far as new tech launches are concerned. And this month is no different – with not one but two new smart phone launches in the form of the Pixel 3 and Razor 2.

In this blog we give you the lowdown on the new devices, along with the all-important details of where to buy them.

When it comes to high-end smart phones, Apple and Samsung have been leading the way in recent years. The launch of the Pixel 3 is a real attempt by Google to chip into some of this market share, offering a number of improvements on the Pixel 2.

With a 5.5in FHD+ OLED screen, the Pixel 3 delivers vibrant colours and a crisp display along with wide viewing angles. Design wise, the handset is similar to the Pixel 2 XL, retaining a more compact feel than many of the other new phones coming to market. Google has removed the traditional home and overview navigation buttons on the Pixel 3, replacing them with a small, cylindrical gesture button in the middle and a back arrow to the left. It is also quite light by modern smartphone standards, at 148g.

Internally, the Pixel 3 runs the latest version of Android 9 Pie - one of only handful of phones to do so.

One of the main pulls of the Pixel 3 is its camera. Its rear 12-megapixel camera has fantastic photo capabilities courtesy of Google’s HDR+ algorithms. It is also able to perform well in low light – with a further promised update called ‘Night Sight mode’ only set to improve this further.

Another smart feature is Google’s Top Shot – a clever function that uses on-device AI to discern if one of the frames it captures before / after you take the photo is better than your shot.

The Pixel 3 comes complete with two selfie cameras on its front: an 8-megapixel camera and a wide-angle fixed focus camera – the latter of which will help you to fit more people into shot.

As one of the latest gaming-focused phones to come to market, the Razer Phone 2 has been eagerly anticipated ever since the launch of its predecessor, the Razer 1. Although sharing some features with the 1, such as size and design features, Razer have upped the ante across a number of the 2’s features.

One of the most obvious of these can be found on the rear of the handset, which is now made from Gorilla Glass 5 to enable wireless charging.

Razer has also added water-resistance to the Razer Phone 2, adding an IP67 rating that should mean it will survive a drop into a pool or the bath.

A further improvement is the handset’s sound quality – with Dolby-tuned front-facing stereo speakers. These provide louder and clearer sound than on their previous phone.

Sticking with the 5.7-inch UltraMotion LCD display that proved so popular on the Razer 1, the handset also has a 120Hz refresh, providing a smooth experience whether gaming or during day-to-day use.

As you’d expect for a gaming-focused phone, the Razer 2 comes complete with some pretty powerful hardware. With its Qualcomm Snapdragon 845 processor performance should live up to the requirements of demanding mobile games.

Razer claims the processor provides a performance boost of 30 percent compared to the Razer 1 Phone, and the handset also comes with a special cooling system to keep the chip cool during strenuous use.

The Razer 2’s processing power is accompanied by 8GB of RAM. Storage wise, the standard model handset comes with just 64GB, but this can be boosted by up to 1TB, via the MicroSD card slot. There is also a satin-finish model which comes with 128GB of internal storage.

In terms of cameras, there is a pair of 12-megapixel lenses on the back of the Razer 2 along - a primary lens with optical image stabilization, and the secondary with a 2x optical zoom. Additionally, there’s an 8-megapixel selfie lens on the front.