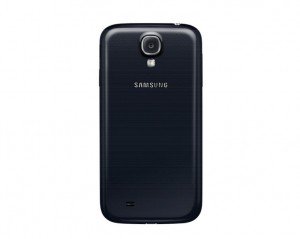 It’s probably quicker to tell you what the new Samsung Galaxy S4 hasn’t got than to run through all its features. It hasn’t got a jacuzzi, an ‘instant lottery win’ button or acres of rolling countryside... It has many other things though, that will make your anticipation of this gadget(?)multi-purpose device(?) swiss-army knife of a phone so much more eager.

It’s thinner and lighter than the S3 and comes in black or white. With 5 inches (steady) of full HD, Super AMOLED screen with 441 ppi (pixies per inch – it’s so magical). And it’s a no-touch screen now. You just have to hover over it (just with your hand - you don’t need to learn levitation) to use the Air-View feature to preview things like emails. You can also use the interestingly named ‘Air Gesture’ to scroll or answer a call (I know which air gestures I’d use for certain people).

Not one, but two cameras. The main ‘front’ camera has 13 megapixels (enormous pixies and lots of them), flash and high speed shutter mode. The second camera means that the clever pixies can take your picture and superimpose it onto the other picture or video. Smart-pause function means that it’ll pause a video if you look away.

Hold on to your seats, I’m going to get even more technical now. The processor will probably be the Octa-core Samsung Exynos 5, with 4 cores for primary functions and another 4 for lesser tasks that will shut down to save the battery when you don’t need them. Speaking of batteries, the S4 will have a battery with 500mAh more than the S3. It’s also removable so you can carry a charged spare. No excuses now...

With recent developments in 4G technology, the S4 will offer full support for 4G networks giving a download speed of 100Mbits/s and upload capability of 50Mbits/s . Existing 3 and 2.5G are also supported. The S4 also has good wifi connection and has an IR transmitter so that you can control your home entertainment systems.
Still with me? Good...It gets more interesting again soon, I promise.

NFC. Not Norwich football club, but Near Field Communication. Shouting at the ref? Nope. It’s what will make it possible for you to use the phone to pay for goods using Google Wallet and Visa’s payWave. It’s also good for fun stuff such as multi-player games, sharing files and other apps.

Speaking of apps – a health app. that measures weight and fitness is being released to coincide with the S4. There’s also S Voice Drive that recognises prompts for use when driving and a translation service that allows you to type and it will speak the phrase then translate the answer back into text.

So, I hear you ask, how much is it and when and how can we get our hands on this amazing piece of kit? It’ll be available in the UK at the end of April and will cost about £500 – a little less than the latest iPhone. Order it online (no contracts, I’m afraid) from John Lewis , Argos or other supplier and let forward2me do the rest with our door to door parcel forwarding service.
If you're struggling to make your purchase, contact customer services and we'll help with our personal shopper service.