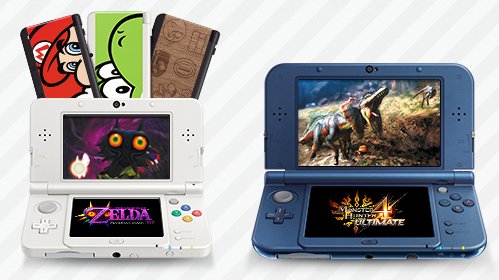 If you've finished playing the games that Santa brought you for Christmas, never fear, Nintendo new releases are here to stop your thumbs from getting lazy!

The first is an all-new, all-singing, all dancing Nintendo 3 DS with 'super-stable' 3-D. It's clever enough to tell when you are not looking directly at the screen and will adjust to keep you in 3-D no matter what. It's other features include customisable cover plates that feature characters from all the most popular DS games. The screen is also 10% bigger (although if that's not big enough, you can always order the Nintendo 3 DS xl). Inside the console, there is a more powerful chip for faster downloads and speedier game loading. Battery life has also been improved, good news for anyone making long car journeys with kids!

But what about the games?

Launching simultaneously, Nintendo has brought out Monster Hunter 4 Ultimate. This game has a 12 age rating; useful if you have kids that want something exciting (but not too violent) to do with their thumbs. The game involves, well, hunting monsters, as well as an element of strategy. You are in the role of bounty hunter, sent to bring down a range of daunting monster adversaries. There are many different types, from dinosaur-like behemoths to insects. The terrain also varies from expansive landscapes to vertical habitats. You have to use strategy and planning to defeat your monster foes and to be honest, having read the Nintendo information, I think this sounds pretty good.

Another game released to coincide with the new Nintendo 3 DS is Legend of Zelda - Majora's Mask. Link will, once again, be battling to save the world against a giant moon. If this sounds a little familiar, that's because it is. The original game dates from 2000 and was originally for the Nintendo 64. There are many special editions with collectibles attached so if you want to get your hands on them, pre-order now and use forward2me's secure international delivery to have the latest Nintendo game in your hands.

Next month sees the launch of a new Wii Mini from Nintendo too. If you have a young family, you can't beat a Wii for family-friendly games. The mini is a smaller console that doesn't have an internet connection. It's new version is released in the UK on March 22nd, good timing for the Easter holidays. Just use our door-to-door tracked delivery service for the latest releases from Nintendo to keep your family's thumbs twitching.